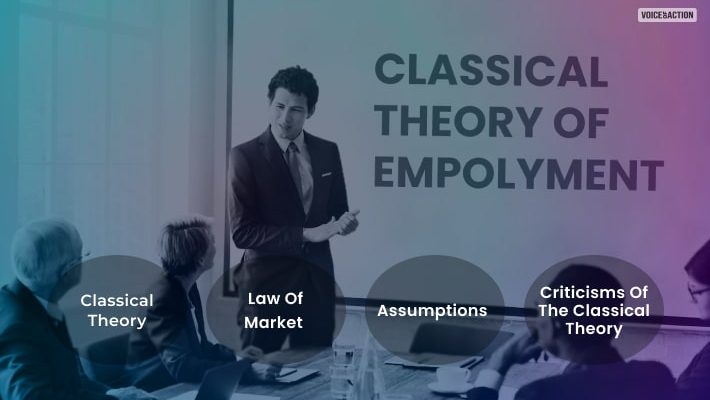 Keynes discovered that the widely prevalent issue of widespread unemployment during the 1930s Great Depression was not addressed by classical economics. As a result, he created a systematic theory of employment that clarified the causes of unemployment and recommended solutions.

What Is The Classical Theory Of Employment?

According to the classical theory of income and employment, the interaction between supply and demand for labor in the employee market determines employment for workers, with people providing a steady supply while employers create demand.

Old-school economists held that the economy maintained full employment through adjustments in salary and price. In addition, any departure from this phenomenon was regarded as an abnormal occurrence. Therefore, say’s market law needs to be examined for comprehending the traditional viewpoint on employment.

What Is Says Law Of Market?

The classical theory of employment was explained by Say’s Law of Market, named after businessman Jean Baptiste Say. It is a traditional economic principle claiming that supply generates demand independently.

The law contends that market prices and employee wages are subject to change and maintain equilibrium conditions in an automated economy. In addition, it also acknowledges that total production generated produces total demand at the same level.

The law’s fundamental premise is that supply and demand are mutually exclusive. Any commodity or service must be available to meet all economic demands. It eliminated the prospect that when aggregate demand is created, the output produced by a fully-employed labor force will not find buyers.

For every excess supply, there will always be an excess demand for one good in a market. With insufficient consumer demand, oversupply is therefore not viable at the macroeconomic level.

What Are The Assumptions Of The Classical Theory Of Employment?

The classical theory of employment assumes various factors that influence the market and its employment rate. These assumptions, according to Say, are as follows:

The law is based on the premise that there is perfect market competition and supply and demand interact to determine product prices.

Other than little interference to facilitate businesses’ free operation, the government does not interfere with the economy’s operation (business firms).

Interest rates, labor wages, and product prices are all presumptively adjustable. As a result, the money, labor, and goods markets all remain in equilibrium.

4. The Market Size Is Subject To Change

With an increase in the number of products created and sold in the market, the market’s size is thought to be flexible and easily extensible.

Money is utilized as a medium of exchange in order to facilitate and streamline the exchange of various goods and proprietary services in the economy.

6. No Money Is Wasted

Without leaks, the money circulating through the economy is used. Since all economic units employ money that enters the system for either investment or consumption, it is presumed that none of them are hoarding it.

Traditional economists are focused on an economy’s long-term equilibrium. These economists are primarily interested in examining and figuring out various factors. It includes how profit is earned, the distribution of income, and the output level are all connected over the long term.

Criticisms Of The Classical Theory Of Employment

Some of the criticisms of the classical theory of employment are:

1. There Is A Deficiency In Aggregate Demand

Say’s law is predicated on the idea that there is enough demand for every individual unit of the total output.

By categorizing demand into consumption and investment demand, Keynes refuted this assumption. He listed the elements that affect investment and consumption demand. He contends that income levels and psychological factors influence consumer demand, but technological considerations and capital’s marginal efficiency govern investment (MEC).

There is a gap between consumption and income because spending grows less proportionately than income. As a result, even when interest rates are low, the amount of income that is not spent gets saved, although this does not necessarily result in investments during company downturns. A deficit in demand arises as a result.

Even if Say’s law asserts that there is full employment, the fact remains true that unemployment nevertheless exists. This is because the economy is unable to react to the lack of overall demand for labor in the market. Therefore, some governmental involvement is required to keep the economy balanced.

The Classical Theory of Employment states that the money gained from the sale of produced goods is used for both investment and consumption. There won’t be any general overproduction because the money spent on consumption will be enough to use all resources in the economy properly.

However, Keynes emphasized that not all revenue is used for investment or consumption. As a result, there is a demand deficit, which causes an issue with overproduction.

4. The True Value Of Money

Classical theorists have disputed that currency is merely a means of transaction and assert that it plays a larger presence in the overall economy. Therefore, it influences various factors like output, employment, and income.

5. Equilibrium Of Under Employment

According to Say’s law, the economy maintains equilibrium when full employment exists. However, Keynes thought that full employment might not always be reached even though aggregate demand with supply is in a state of equilibrium.

Critics like Keynes asserted that money circulation isn’t always capable of self-regulation. Say’s law was founded on the idea that interest rates and prices can fluctuate to keep the economy in equilibrium. The inability to predict wage, price and interest rate levels cause the economy to be out of balance.

Students frequently ask questions related to the classical theory of employment like:

Q1. What Is The Classical Theory Of Unemployment?

Ans: According to the traditional theory of unemployment, the level of real wages affects unemployment. It happened when rigidities brought on by minimum wage laws, union negotiations, or effective salaries force real wages to be fixed above the equilibrium level.

Q2. What Do You Mean By Classical Theory?

Ans: According to classical theory, every complex idea has a classical analysis, which is a thesis outlining the metaphysically necessary and coequally sufficient conditions for that concept to exist across all possible worlds.

Q3. Why Is Classical Theory Important?

Ans: Understanding classical economics can help answer various kinds of queries. Here, your sociological imagination, or the capacity to recognize how crises and occurrences are never separate phenomena. However, they are based on social life, and the structures of society are further developed as a result of learning classical theory.

Q4. Who Is The Father Of Classical Theory?

Ans: Many people refer to Henri Fayol (1841–1925) as the “father” of contemporary management. He had served as managing director of a significant French mining business and was more interested in organizational efficiency than job efficiency.

Although the classical theory of employment is entirely logical at its core, it is mostly irrelevant in terms of application. Therefore, you cannot use it to address the world’s pressing issues. The main flaw with classical theory, according to D. Dillard, is that it is irrelevant to the circumstances of the modern capitalist world.

The classical theory of income and employment is no longer widely embraced by the general public or by academic and corporate economists, to use Peterson’s words once more.

Lustre Vs. Glossy: Which Should You Choose For Your Photo Prints

What Do People Think Of When Investing In Property In Dubai? 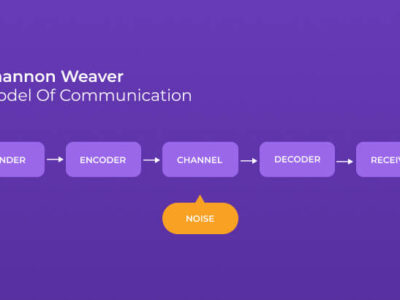 Shannon Weaver model of communication was first time introduced in 1948. The theory is the ...
By Loknath Debnath
December 8, 2022 Business growth refers to many aspects of business management, all of which are necessary for ...
By Addul Aziz
December 2, 2022